In August 2012 Chinese President Hu Jintao opened the fifth China-Africa Cooperation Forum with the announcement that China will offer an additional US$20bn in loans to Africa over the next three years. This is double the amount that was offered at the 2009 forum.

In the past 10 years, Africa has seen a huge interest from Chinese investors who, in order to fuel their own growing economy and population, require access to the continent’s vast reserves of minerals and other resources.

The commodities boom has benefited resource-rich African countries. Daniel Tarling-Hunter, an economist at Euromonitor International, stated in a recent report that the Metals Index increased by 290% between June 2000 and February 2011. 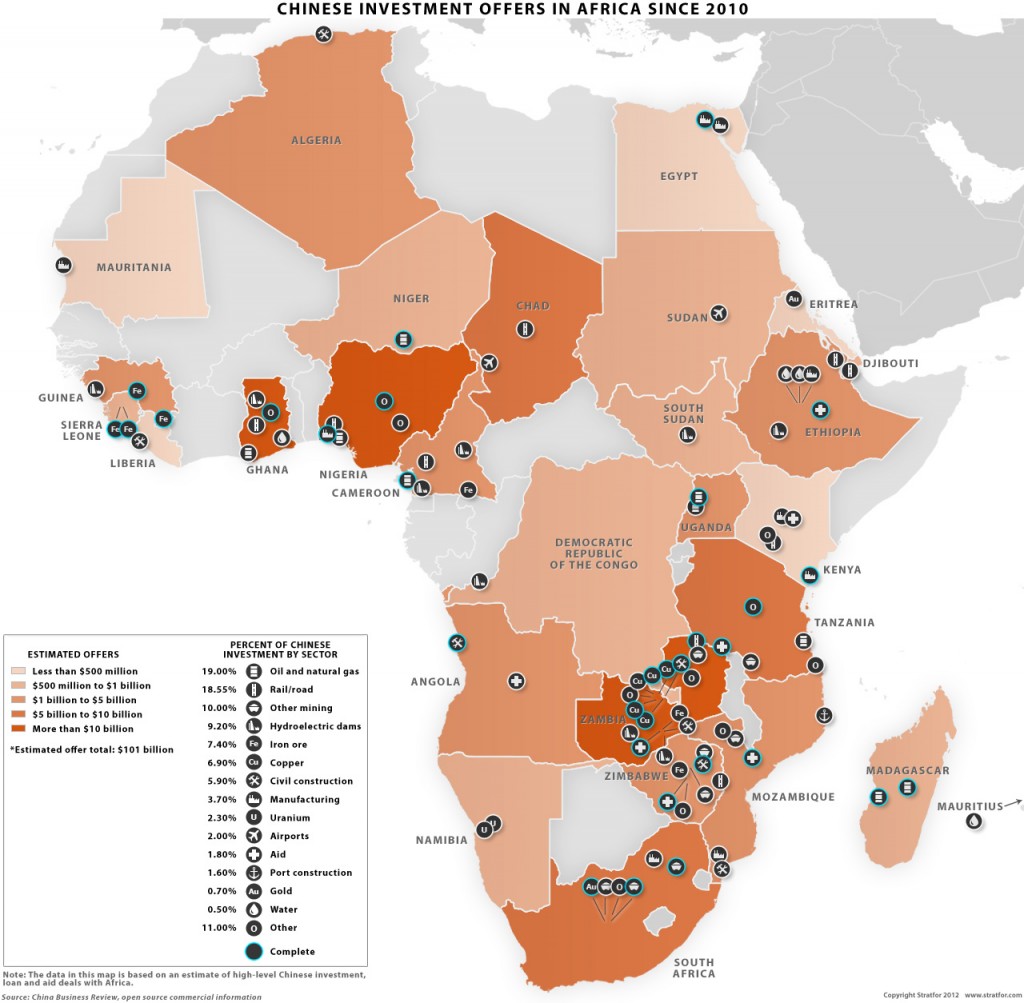 “China’s demand for goods has been instrumental to these rising prices, the country imported more metalliferous ores and scrap metal in 2011 than the 10 largest importers behind it,” explained Tarling-Hunter. “Raw material-rich African countries such as Nigeria, Zambia and South Africa have benefited from this demand, supporting a real GDP growth rate in sub-Saharan Africa of 75.2% between 2001 and 2011.”

Tarling-Hunter also pointed out that Africa, the Middle East and Australasia are the only regions in the world that China runs a trade deficit with – worth over $59bn in 2011 – as China’s imports of raw materials exceed that of their exports to those regions.

China has also invested in energy security in order to support its long term growth. As oil is a major import for China, it has been investing in refinery projects across the African continent. Algeria, Sudan, Chad, Niger and Nigeria all have oil refinery projects funded by Chinese firms, with the Nigerian project worth $23bn alone, as indicated by Tarling-Hunter.

But Chinese investment is not limited to raw materials, with the country investing in various infrastructure projects around the continent, as well as in the African consumer. Between 2006 and 2011 sub-Saharan Africa saw a 19.3% increase in consumer expenditure in real terms. This has a lot to do with the growing African population, which exceeded one billion in 2010 and is expected to grow to 1.6 billion by 2030. In line with this is the rapidly growing middle class.

Heloise Smith, executive vice president of business development at Standard Bank, said in a recent KPMG panel conversation focused on transacting in Africa that the growing African population – that is increasingly affluent – is driving some of the trends seen in Africa, including investment in the fast-moving consumer goods (FMCG) sector.

“There is a lot of debate as to how you define the African middle class and you can debate about what the definition is, but the fact is its growing and it is increasingly urbanising which makes it possible for the FMCG [companies] and other service providers to get economies of scale because you are increasingly going to have cities in excess of 10 million people on this continent over the next few decades,” said Smith.

China has embraced opportunities in the FMCG sector. According to Tarling-Hunter, low cost electronics are in demand in Africa, with the telecommunications market doing particularly well. “Lower costs of production and more aggressive investment strategies have allowed Chinese firms to flourish against western competition,” he said. “Huawei, a Chinese telecommunications firm, has invested $1.5bn in Africa since it entered the market in 1998, with its low cost smartphone offerings gaining market share on the continent.”

TO KNOW MORE ABOUT INVESTMENT OPPORTUNITIES IN AFRICA.  CONTACT US!