‘Mogadishu is like Manhattan’: Somalis return home to accelerate progress 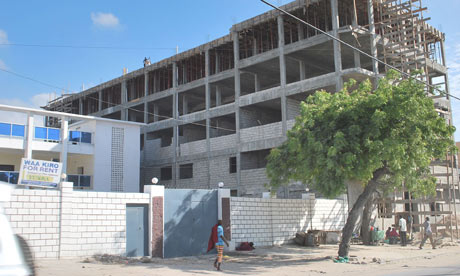 Ownership can be difficult to prove, but many people are snapping up land in Mogadishu. Photograph: Laila Ali

The sound of bullets that was once so common in the Somali capital of Mogadishu has been replaced by the noise of construction. New buildings and business are emerging from the carnage and lawlessness that pervaded the east African country for more than two decades.

Mursal Mak, a British-Somali property developer, left Somalia in 1987 and returned in 2009. For him, it has never been a better time to do business there. “I have seen a lot of changes from 2011 to now,” he says. “Mogadishu is growing very fast. I was at the airport today for an hour and I saw six airlines, all of them commercial. There is also a traffic jam in the streets now; we can drive out late at night.”

With so many people from the diaspora coming back, demand for properties and accommodation far exceeds supply, tripling rental prices in the prime areas of the city. “Retail estate is booming in Mogadishu,” says Mak. “This evening I had a meeting with a client and he said: ‘Mogadishu is becoming like Manhattan or central London; you are talking incredible prices when it comes to property.’

Although people are snapping up land and some have grand ambitions to develop, in many cases the land is unregistered or ownership cannot be proven. There have been cases of fraud and land being sold to multiple people. “Either you buy on trust, or from owners you knew before the war. But most people are willing to take a risk and buy on a discounted price of 50% because ownership cannot be proven,” Mak says.

Mogadishu businessman Bashir Osman, owner of the Peace hotel, has bought a chunk of land in Jazira beach with the intention of building the first tourist resort in Mogadishu. Osman’s hotel was one of the few operating in Somalia during the conflict; it was mostly occupied by people working in the humanitarian sector. To him, the idea of opening a tourist resort isn’t so far-fetched; he has experience of hosting thrill-chasing foreigners, some of whom just turned up at the airport with no plans or onward arrangements.

“I picked up my first tourist in 2010,” says Osman. “He was a Canadian man and had problems getting a visa. When he told the immigration authority he was a tourist, they told him he was either mad or a spy and tried to put him back on the plane. At that time it was still too dangerous to go outside and sightsee, so he mostly stayed inside the compound, but we made sure he had a good time. Now, when people come to Mogadishu and say they are tourists, the only question they [immigration] ask is how long do you want to stay?

“Last year, we had about 20 tourists. I took them to the old parts of the city, different beaches, Bakara market, historical places, and showed them the life of a Somali family. They were very interested.”

Omar Osman is another Somali who chose to come back, after living in the US for more than 20 years. “Like everybody else [who came back], I felt there was an opportunity to make a difference. I grew up in Saudi Arabia. Initially, it was very tough for me here; I came in early 2012, before the new government, so we still could hear guns and shooting at that point, but so far things are good.”

Osman and his business partner have set up a commercial bank, First Somali Bank. “We have a bank structure in place, it’s operational for people to deposit and withdraw their money but we cannot provide loans and credit,” he says. “We are waiting for the government to introduce laws and regulations before we can do that. Our goal is to function as a regular bank and to finance projects.”

With funding from their bank, Osman and his partner have started an internet company, Somalia Wireless, to meet the growing demand for connectivity from the private sector. “When we first arrived in Mogadishu, internet penetration was less than 1%,” says Osman. “Now we have coverage throughout the city, with the exception of some areas where connection is still patchy, but we are working on that. The hardest part of setting up the company was logistics. We had to ship huge equipment and get in engineers from Germany to set up. In the absence of proper governance, there are pros and cons: anybody can set up a business here but I think eventually the government will introduce regulations.

“We are trying to advocate the setting up of business to be as smooth as possible, because, ultimately, the growth of business will translate into job creation and prevent youngsters from being idle and walking into terrorism. Investing and making money is not the goal. The goal is to create jobs, do something to benefit the masses and make life better for every Somali.

“All of us who were in the diaspora are supporting families one way or another here in Somalia. If we can bring some of that support locally and get them to do something for themselves, to earn a proper living, there is nothing better than that.”